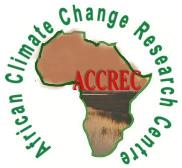 ACCREC is a non-profit, non-political United Nations climate observer
organization dedicated primarily to preventing emission of green house gasses,
environmental degradation and climate change in Africa.
ACCREC is registered with Nigeria’s Corporate Affairs Commission. It originated
in December 2009 as a result of the inconclusive international conference on
climate change that was held in Copenhagen, Denmark, which more or less ended
up in deadlock, because of the failure of the conference’s participants to arrive at
a common standpoint. In view of this therefore, Africans have no choice than to
seek for a new beginning by bringing home some wave of change to their climate
change problems that remain a menace to the continent.
Africa is projected to have between 75 and 250 million of its people exposed to
increased water stress by the year 2020, due largely to climate change. In some
African countries such as Niger Republic and Nigeria, yields from rain-fed
agriculture could be reduced by up to fifty percent (50%). Our continent is today
the most vulnerable one on earth, which is now facing the greatest catastrophe in
human history. There are three (3) reasons behind the establishment of African
Climate Change Research Centre.
First, to engage in research and development on climate change issues, because
our continent is a home to fifteen percent (15%) of the world’s population that
only emits less than 3% carbon compared to the rest of the continents that harbor
greatest emitters like China, Britain and the United States who today benefit
greatly from the largesse of Africa’s vast resources, but are not ready to show
greatest commitment(s) to reducing carbon emission.
Second, as temperatures rise above 20C per annum Scientists predict that an
estimated two (2) billion people will be affected by water shortages and majority
of them are Africans. Rise in temperatures will propel a rise in sea level, and a
menu for unprecedented disaster in Africa.
Third, a heated up atmosphere and polluted cloud do not simply rain themselves
out. Polluted cloud tends to grow larger and last longer and bounces sunlight out
to space. While industrial aerosols like sulfuric acid reflect heat, greenhouse gases
such as C02 simply trap it.
However, the Earth has not warmed up as high as expected. We can still act and
avoid the kind of calamity that happened in the case of 1930’s Dust Bowl in U.S
and the 1970 famine that ravaged the Sahel region of Africa where a
meteorological drought was exacerbated by agricultural and pastoral practice that
stripped the land bare, exposing it to the mercies of the Sun and Wind.

0
We use cookies on our website to give you the most relevant experience by remembering your preferences and repeat visits. By clicking “Accept All”, you consent to the use of ALL the cookies. However, you may visit "Cookie Settings" to provide a controlled consent.
Cookie SettingsAccept All
Manage consent